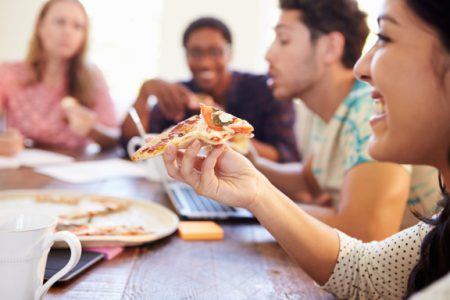 We all know that sports games are a great reason to get together over chips, dips, and wings – but when we looked at office eating habits around March Madness, it seems that basketball is a whole different ball game. So will you be eating more or less? Are you likely to be reaching for a burger or a salad? And which US city likes to celebrate the most?  We compared March Madness orders over the last two years to get to the bottom of these delicious questions.

Last year, DC and Boston were the two cities most likely to order food for March Madness – and both the Northeastern Huskies and Georgetown Hoyas had second round games. Coincidence? We doubt it.

This might not be too much of a shock, but when it comes to March Madness, salads seem to be a no-no. Six major cities all showed a reduction in salad orders during the games, with San Francisco showing a particularly steep decline – salad orders were down 38% from the year before.

Overall, DC workers were 16% more likely to order catering during March Madness.  All that rooting for a successful team sure does make people hungry! Plus, their breakfast orders increased by +300%, suggesting that some staff members needed a little gastronomic TLC the morning after games, too.

Whether or not you follow basketball, one thing is clear – March Madness is the perfect reason to order an office lunch and cheer on your local team. With most cities showing an increase in catering orders during the games, it seems that March Madness puts everyone in a celebratory mood – and win or lose, at least your own team is guaranteed to be satisfied!