Around the World in 5 Olympic Themed Office Meals 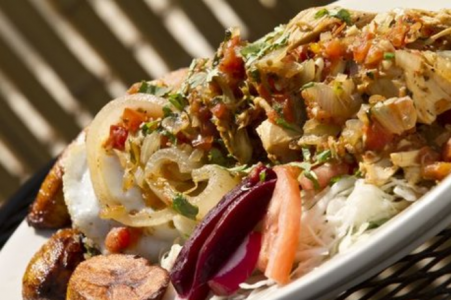 The Rio Olympics are here, providing the perfect excuse for a little office celebration (and some friendly competition). While the games deliver the sights and sounds of Rio directly to TV screens in homes and workplaces around the globe, we’re busy delivering flavorsome dishes to represent every country competing. To celebrate the diversity of sportsmanship (and food!), here’s a round up of some of the more interesting and unusual International cuisines sure to inject some Olympic spirit into your workplace.

BRAZIL (SOUTH AMERICA)
Food: The first stop on our gastronomic tour is the hosting nation: Brazil.  If there’s one thing the Brazilians know (along with their Argentinian neighbors), it’s how to barbecue a good skewer of meat. So what are you waiting for? Order in an array of perfectly seasoned succulent cuts and some delicious veggies, hand out some wooden skewers, and let your team loose on a lunch worthy of a medal.

Drink: Stave off the summer heat with a glass of cool coconut water. Brazil’s água de coco is a popular choice of refreshment – and is even better when sipped straight from a coconut.

KYRGYZSTAN (ASIA)
Food: Yep, you read that right. This lesser known country sits between Kazakhstan and China, has a population of 5.7 million, and has teams competing in judo, boxing, and swimming. While Kyrgyz restaurants may be difficult to come across, you can help to fly their flag with dishes of noodles and dumplings (their popular noodle dish, ‘Lagman’, is traditionally served with vegetables), or Indian-style samosas, which are similar to the Kyrgyz favorite, ‘Samsa’.

Drink: If you can’t get hold of any sheep or camel milk to wash down your lunch (both are traditional Kyrgyz drinks), the Kyrgyz population favor malty, carbonated drinks made from cereals or wheat – so grab a tall glass of something fizzy to represent this team!

NORWAY (EUROPE)
Food: While modern Norwegian cuisine bears the hallmarks of most Western European countries, it’s worth taking note of the traditional cuisines that helped fuel scores of Vikings back in 700AD. Put a Scandinavian twist on your classic office bagel breakfast, and instead lay on a platter of smoked, cured meats, and soft cheeses served on single slices of whole-wheat bread. For something a little sweeter, Nordic-style cakes and pastries are also extremely popular – as well as rhubarb pie, if you’re feeling adventurous.

Drink: An orange-flavored soft drink called “Solo” was bigger than Coca-Cola in Norway until the 1960s, so order in some orange juice and raise a glass to the Nords!

MADAGASCAR (AFRICA)
Food: The people of exotic Madagascar know exactly what they like to eat: and that’s rice, which is typically served as part of every meal. Malagasies consider rice to be their national dish, but it’s far from boring – they flavor perfectly cooked rice with garlic, onions, ginger, and curry powder, and serve it alongside succulent steaks, lobster, and shellfish. Pay homage to the colorful island by ordering in an array of rice-themed dishes, and serve fresh fruit platters for dessert.

Drink: The Malagasy people don’t just eat rice as their national food – their national drink is also made from rice! “Ranon’ampango” and “Ranovola” are made by adding hot water to the toasted rice left over in the pot after cooking – which, according to the people of Madagascar, makes a refreshing alternative to water.

VANUATU (OCEANIA)
Food: Another smaller entry into this year’s Olympics, Vanuatu is a Pacific Island Nation located in the South Pacific Ocean. Despite having a population of just 221,506, Vanuatu have four athletes competing at Rio – in rowing, table tennis, judo, and boxing.  Vanuatuan-style cuisine is perfect for vegetarians – they cook with an array of fruits and vegetables including papayas, pineapples, mangoes, plantains, and sweet potatoes. Their national dish, ‘lap lap’, is a mixture of yam, banana, and manioc mixed with coconut milk. While you might not be able to get hold of a traditional Vanuatuan spread, embrace the tropical flavors of their nation with fruity dishes, coconut-based curries, and flavorsome rice dishes with plenty of fruits and vegetables. Bonus points if you can serve everything on a banana leaf, too.

Drink: The Vanuatuan’s national drink is called “Kava”, which is brewed from Piper Methysticum leaves, is known for its relaxing properties. Given that it might be tricky to get hold of (and may not be the best solution for fueling productivity), perhaps serve a refreshing glass of mango or pineapple juice instead.

Whether you choose one country to represent for a team lunch or evening event or you decide to do a tour of many cuisines, Seamless is always here with the most variety of any food delivery company. Reach out to learn more!